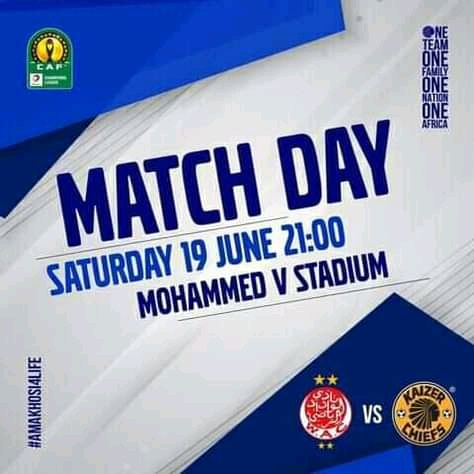 Kaizer Chiefs interim coach Arthur Zwane and his assistant Dillion Sheppard will be leading the glamour boys to the promised land. The newly appointed coach Stuart Baxter is still waiting for his work permit to resume his duties from the bench.

Wydad Casablanca coach Faouzi Benzarti the Tunisian born has warned his players about the new changes at Kaizer Chiefs.Benzarti won the Champion league in 1994 with Esperance. The match will kick off at 8pm on Moroccan time and 9pm on South African time.

Amakhosi will be without Lebogang Manyama , Khama Billiat , Dumisani Zuma and Ramahlwe Mphahlele.The iDiski TV analyst Junior Khanye has once again predicted that Wydad Casablanca is going to score more than 2 goals from this match.

Mamelodi Sundowns Captain Hlompho Kekana has backed Amakhosi to advance to the final of the CAF Champions League for the first time in history.