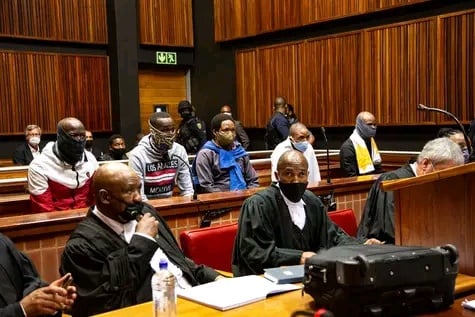 The sister who remained anonymous,speaking to Jacinta Ngobese on Vuma FM cruise she said"My brother is accused number four ,he is the youngest in the family.I went out to do public campaign because I learnt that public opinion matters most.I needed as much supporters as possible.

"I knew that my brother is innocent,I went to Vosloorus streets to gather information regarding this case.People know what happened on the day Senzo Meyiwa was killed.They told me that there's no one who entered the house ,they heared a gun shot.

"They saw a car coming out it is alleged that it was Kelly Khumalo car.I did asked my brother several times to tell me the truth ,he said he didn't kill Senzo Meyiwa.My brother was not in prison at the time he got arrested.It is Mncube who was already in prison ,he was arrested in August in the same year.

"All these five accused are from the same village and they are closely related.Accused one and two were offered money to agree that they have killed Senzo Meyiwa.After they rejected the offer it's when they were forced to write a statement of confession,they were assaulted.

"Brigadier Bongani Gininda is the one who came to arrest Mr Sibiya. He was offered R100-000 shall he agreed to have killed Meyiwa.He told him that he's got money ,he will never agreed on that.They went to offer Ntanzi R3 million to agree on the matter.

"It is how he was assaulted as well.I have got the docket in the year 2020.I had decided to remain anonymous in order for me to be right.I met Advocate Teffo in a private place to show him the docket.This is the docket says people who were in the house when Meyiwa was killed should be arrested.

"The police told me that every police who is investigating this case is getting fired.According to the docket Senzo was killed mistakenly,actually they had an argument inside the house.In this case lot of people have been paid".