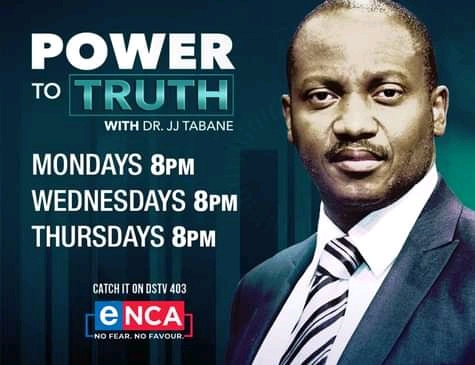 TV host and Journalist Onkgopotse JJ Tabane says the Minister of Employment and Labour in South Africa Mr Thembelani Nxesi known as Thulas Nxesi went to BBCSA. According to Tabane it was about remarks that he made on air where Nxesi felt it is beyond the freedom of speech.

Speaking to David Mashabela on King David Studio podcast he said"Nxesi went to BBCSA to report that we said his department is incompetent, him instead of coming on the show to respond he chosen to go to BCCSA".

Tabane was onced Suspended by Newzroom Afrika news channel following his remarks he made about witchcraft and Limpopo , now he's working for eNCA doing a show called Power to truth on Mondays and Wednesdays at 20h20.

He said"I have just finished my editorial for the month of February it was mainly about education and I had to do the Bishop Tutu editorial as well since he has left us.I was born in 1972 in Brest then my parents moved to Hibron in 1977.My mother was a school principal thou my father has already passed away.

"My father was a Librarian in Mamatho before he moved to the national Library in Pretoria.I got married at the campus at the age of 25 years which it lasted only four years". Tabane suggested that Ward Councillors should be people who are active in the community like school teachers , not just taking a person from nowhere to become a leader .

Tabane who studies at Lerato Primary School and Tsoho high school at Makau says his mom contributed a lot on what he is today interms of discipline.He said Mmusi Maimane and Hellen Zille are the only people who ever replied to his letters .