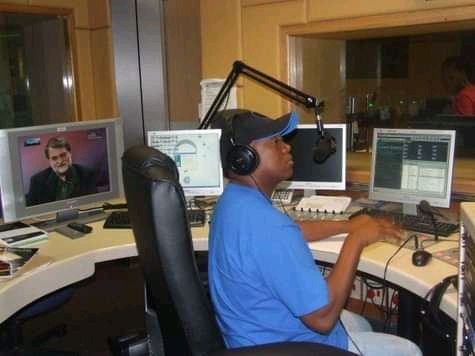 Linda Sibiya Mr Magic visited the Community Radio Station Imbokodo FM in Pinetown,KwaZulu Natal.Sifiso Maqhina Imbokodo FM DJ interviewed Mr Magic about his journey on radio.Linda told Imbokodo FM that his full names are Lindokuhle Mehlendoda Sibiya. "My father had many wives and I'm a eleven child on my mother.At school I used to joke a lot , organizing patsula's competitions.One of the sad moment I went through in life was when I collapsed at school. According to the teachers the causes was hungry-ness,I was hungry.

"Everything happened in my life it was a will of God ,I mean everything including my contract that was terminated in 2014 at Ukhozi FM.Church has been part of my life ,while I was at school I used to preach over the weekends at the same time selling at the trains said Mr Magic. The love for radio started in 1983 listening to Kansas City ,Bodloza Ndzimande and Sjula Mnisi. "One of the mistakes I did on radio was to play a national anthem.The advice that I always give those who still want to be on radio is, it happened that you love radio but the radio doesn't love you mean there's a lot you can do except being on air.You can be a content producer ,technical producer without being on air".

Linda Sibiya passed the auditions in 2001 to join Ezodumo on SABC 1, He worked on Gospel Classics , Sifun'ukwazi on Mzansi Magic.Currently he's running a foundation called Linda Sibiya Foundation and a School of Radio.While he was on air his daughter phoned and the gospel artist Dumi Mkokstad. On the feature Sakaza nosaziwayo Linda's song was Queen of Dance - Amateki and Sifiso's song was Mercy Pakela.Some of the songs that were played during Linda Sibiya interview ,is Brenda Fassie - Weekend Special and Dr Mageu - Fella Kae.