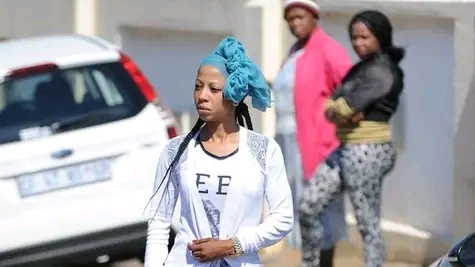 The musician and girlfriend of the late Orlando Pirates and Bafana Bafana goalkeeper Senzo Meyiwa told Ukhozi FM before , that the Meyiwa family are the ones who hate her.

Speaking to Irvin Sehlophe Kelly said"I never thord that one day I'll fell in love with the soccer player. Personally I'm not a fan of soccer.I met Senzo through our mutual friend ,they were watching TV at the camp ,then Senzo told our friend that he wants me.

"It's how I met him.We got in the relationship ,sometimes we had fights just like anyone who is dating.We forgave each other.I know that other people were not happy with our relationship.I ignored those negativity.He was supportive ,he was there when I record my album at Chicco Thwala studios.

"On the 26 of October 2014 the day he was killed ,in the morning it was a beautiful day I was talking to my sister about relationship matters.We were preparing to go to Soweto with Senzo as he was not committed on that day.We decided to go home in the afternoon because my mother had a culture of bringing the family together on Sundays for a lunch.

"When I talk about this it pains me ,I never thord this will happen to me.It would be better if he was sick because you can prepare yourself rather than what happened.When I was at hospital ,I went outside to pray for his life to be saved.He was a loving man ,I wanted my child to grow up having a father.

"People who influenced South Africans to hate me is ,Meyiwa family.They took their hatred and project it to me.They made everyone to believe that I'm involved on the murder of Senzo Meyiwa.The damage is done , Meyiwa family had accused me a lot.I concluded that I'll forgive them and leave them In the hands of God ,but I don't see reasons to meet them.

"They never loved me from day number one ,they have never met with my family to discuss the damages regarding the child.There no need to engage them ,the child belongs to Khumalo family.She's old now she would want to know about her father".